Ample Parking from Beh Street, off West Street, behind the surgery. 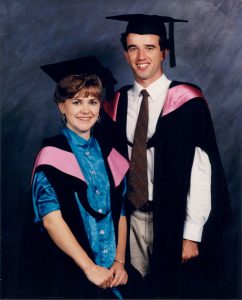 In October 1988, West Toowoomba Veterinary Surgery was founded by Bob Doneley. After more than 20 years working and developing this practice, Bob has decided on a change of pace and is now working for the University of Queensland Veterinary School. This has lead to us purchasing the clinic in October 2010.

We graduated from the University of Queensland Vet School in 1991, both with first class honours. After a year of working in Australia we travelled to England where we worked for 5 years. Christine worked primarily with small animals, while Michael enjoyed the challenge of mixed practice. We were lucky enough to practice in some very modern clinics and gained experience in small mammals and exotic pet medicine, which is standing us in good stead in our new endeavour.

On arriving home, we spent some time working in various country towns, before deciding that Toowoomba was the ideal place to settle and raise our family. By this time the first of our 3 boys had been born.

Michael began working at South Toowoomba Veterinary Surgery, where he stayed for 6 years before being offered a partnership at Eastwood House and Clifford Park Veterinary Surgery. While working at South Toowoomba, Michael completed a Post-graduate Certificate and then a Membership in Small Animal Internal Medicine. He has also recently completed a Small Animal Surgery post-graduate course.

Christine had time off from veterinary practice to raise our 3 boys, going back to work when our youngest was 2 years old. She joined Michael in partnership at Eastwood House where she has been working for the last 5 years. She is the Animal Welfare Officer for the University of Southern Queensland.

Currently we have a menagerie of 3 boys, a dog, 2 mad cats and assorted fish.

We are the local RSPCA’s official veterinary practice and are providing the desexing and health services.

If you have adopted a pet from the RSPCA, see us for discounted vaccinations.

Incredibly caring & knowledgeable staff when injured or vulnerable wildlife need attention. Thank you to all at West Toowoomba Vets. So appreciate your skills & community service.

A very friendly yet professional service .I take my 3 pets to the practices any time I have worries or just for their routine checks and vaccinations.
I always get the best treatment and so do my pets

Always available and a pleasure to deal with.

As usual everyone is very professional, friendly & caring. Even though we lost our beautiful Cheerio we really do appreciate your compassion & caring at such a difficult time. Thank you.   Hard to improve on perfection but I’m sure you’s will always strive to be as good as you can.

I have always found the staff helpful and caring. I love my animals and feel they are always treated with the upmost care and respect.

Knowledgeable, friendly and caring staff. It’s always a pleasure to take my pets to this practice as they are treated like their own.

We can’t recommend West Toowoomba Veterinary Surgery highly enough! Michael, Christine and the vet nurses are all wonderful. They have supported us through some really difficult times with our dogs and cats. They genuinely care for us and our precious pets. The best by far!

I take 3 cats and have taken a guinea pig into these vets. They are affordable and more importantly my animals are calm in there presence. I won’t go anywhere else.

Prompt and thorough attention to my best mate. Options were clearly explained, with great followup

West Toowoomba Vets is the best Vet in Toowoomba. Don’t go to anyone else as they listen to why you are there and care about my pet. Best vet.

At all times the staff were interested in my dog and myself, being very informative and helpful with a good care factor

West Toowoomba Vets have taken care of our pets’ routine appointments and any problems that have arisen for many years now. Michael & Christine listen carefully to concerns and provide considered & knowledgeable advice and treatment options. We have been very happy with the care they’ve provided & will continue to use them well into the future